Recently, I began to read the book, A Midsummer Night’s Dream by William Shakespeare. I haven’t finished the book, but what I can tell you so far is that it is getting quite interesting. I love the plot in the imagination I use, which basically consists of a forest away from reality. The detail of nature’s beauty is incredible. In all honestly, at first I didn’t think that I would like it all. Many people told me they didn’t like it or it was boring, but their experiences probably came from a reflection of their interests. So, now I know to not judge a book by what other people say, or at least the delinquents I have as friends.

Anyways, from what I have read, it is primarily a book about love stories, but a complicated one with several people. It is so powerful that it convinces my head that I have existing drama in my life…I love it! My life is weird, but not necessarily dramatic, so I enjoy being part of it (at least as the audience).  Shakespeare has figurative language that is clever, but it takes the right mindset to see it. I’m not saying ideas and voices have to be the same, but rather the intentional purpose does. Who knows, it could take place in the 1500s or even today. That’s something I love about it too because you don’t have to agree with what everyone else says. You can let your imagination roam to whatever you want, meanwhile other books don’t allow that creativity to occur.

“Set you heart at rest: 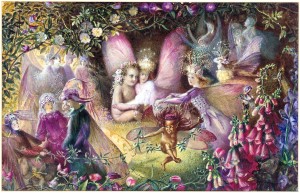 The Fairyland buys not the child of me.

His mother was a vot’ress of my order,

And in the spiced Indian air by night

Full often hath she gossiped by my side

And sat with me on Neptune’s yellow sands,

When we have laughed to see the sails conceive

And grow big-bellied with the wanton wind;

Which she, with pretty and with swimming gait,

Following (her womb then rich with my young squire),

Would imitate and sail upon the land

To fetch me trifles and return again,

As from a voyage, rich with merchandise.

But she, being mortal, of that boy did die,

And for her sake do I rear up her boy,

And for her sake I will not part with him.”

This specifically occurs when Titania is trying to tell Oberon that she loves her child. She refuses to give him up. I love how the author connected the mother to a son and the powerful relationship that allows us to visualize how she puts her children before her husband. In my case, this happens in my family with my parents, so I can relate to it.

Overall, I enjoy the book. If you haven’t read it or are reading it, you need to! It is a great play by William Shakespeare, in which basically all of his plays are. Even after several centuries, he is still recognized, which is a great honor considering he made history and the motivation of today.

3 thoughts on “A Midsummer Night’s Dream”

I'm also into fashion, so you should check the link above if you're into it too! Thanks - Carla Valdez
%d bloggers like this: